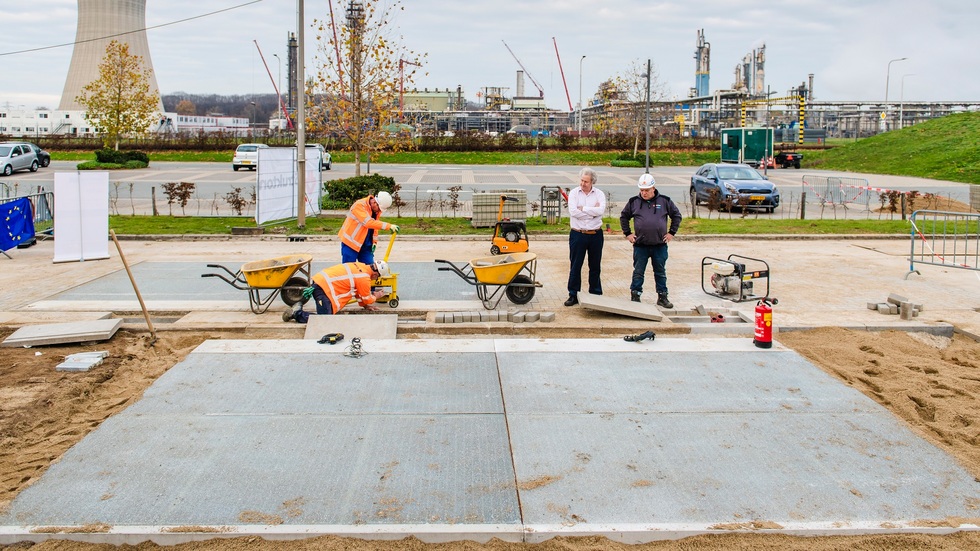 November 18, 2020 marked an important step in the Interreg innovation project Rolling Solar. At Brightlands Chemelot Campus, the construction of a solar road section based on crystalline silicon solar cells made by SolaRoad was realized. Now the testing for temperature profiles, electricity production and robustness has started. At the same time, the consortium is preparing the second pilot. In August this year, it will also install a road section with thin film solar cells. ‘So, in collaboration with a large number of renowned knowledge institutes, we are working on optimizing today’s technology while creating tomorrow’s,’ said Arian de Bondt, director of SolaRoad.

The history of SolaRoad covers more than a decade. The company has its origins in a partnership with, among others, TNO, the Dutch province of Noord-Holland and Ooms Civiel. Since 2010, it has focused on technology development for integrating solar panels and infrastructure. After several pilots, the phase of commercial roll-out of PV road sections has started for SolaRoad. For example, the company is currently building a solar cycle path which extends more than 300 meters along the N417 between Utrecht and Hilversum.

Not in doubt
‘Our product has a yield of 120 kWh per square meter per year’, says De Bondt. ‘It has proven itself in circumstances where the traffic load is not extreme, for example on cycle paths, driveways, sidewalks and squares. The total amount of surface of this type of infrastructure in the Netherlands is enormous. Consequently, this also applies to the potential added value for the energy transition if we use it for generating green electricity. And that’s already possible. At the same time, the application of this technology is in its infancy. Further development is important to make it more robust and cheaper. That’s why we didn’t hesitate to join Rolling Solar.’

Reference strip
In the Rolling Solar consortium, scientists and companies from Belgium, the Netherlands and Germany join forces. They are exploring the possibilities of integrating PV into infrastructure and want to accelerate the commercialization of this technology. The project partners are building various demonstrators for this purpose, including one at Brightlands Chemelot Campus where a test setup for a solar road of 60 square meters will be realized. This consists of 2 sections of 10 square meters with integrated monocrystalline silicon solar cell modules and another 2 sections of the same size with integrated thin film technology, namely TNO-Solliance CIGS solar cell modules. In addition, there is a reference strip with both technologies that is not used by traffic.

Moment of truth
De Bondt: ‘The section with our monocrystalline silicon products has been installed. The measurements – which are carried out by Zuyd University of Applied Sciences – have also started. That’s exciting already. We have had both decent cold and hot days in recent months. These temperature changes cause expansion and contraction, and of course also the development of moisture. With the help of measurement technology from UHasselt, the impact of these effects is investigated in detail during the seasons. But a first glance already shows that everything looks good in regarding the climate factor and that everything works properly. The second moment of truth comes during the summer holiday, when we start running cars over the road. The fact that the solar road is situated in a bend offers a nice extra dimension in terms of load.’

Upgrade
In Rolling Solar, SolaRoad is actually optimizing its second-generation technology. The PV parts are 21 centimeters thick. They consist of 6 plastic solar cell modules of 360 by 300 centimeters, equipped with 60 crystalline silicon solar cells. These are joined together in a steel frame, then embedded in a concrete slab in a transparent epoxy that covers the solar cell modules by 1 centimeter. In addition, a layer of small glass balls is applied to ensure the correct surface resistance from the point of view of safety for road users. The upgrade of SolaRoad’s already existing commercial products lies mainly in a better adhesive layer between the frame and the concrete, the construction of the frame and the production process.

Assembly process
‘It is no secret that we have had problems with pilots in North and South Holland in the recent past’, says De Bondt. ‘We aimed to see how far we could take our technology, for instance by applying it in a PV bus lane in Spijkenisse. In March 2019, just after the opening, some pieces of the epoxy layer came off. A trial with a solar road section at Schiphol had the same problems. We have an excellent solution for lighter applications. However, working on robustness remains a priority, not only in regard to the design, but also to the assembly process. In addition, with the trial at Brightlands Chemelot Campus, we also learn a lot about the optimal way to connect the PV road parts, for example concerning the use of connectors and cabling.’

‘Rolling Solar can also contribute to this by creating awareness and trust. At the same time, the question remains to what extent SolaRoad’s current technology will ever be applied in the most challenging traffic situations; in roads that are used by many cars and heavy vehicles. In that respect thin film applications are the holy grail. These solar cell modules may – until now – be less efficient in generating electricity, but in principle they can be integrated into new prefabricated and existing road surfaces much easier and cheaper. You can simply glue them to the surface. This makes it the technology of the future in infrastructure integrated PV, and it is also developed, built and tested in pilot 2 of this project. We’ll be producing these thin film road sections soon. We will install them at Brightlands Chemelot Campus in in August and commence testing them for temperature profiles, electricity production and robustness.’

Mechanical performance
Within the Rolling Solar project, a large number of Dutch, Belgian and German knowledge institutes work together. In pilot 2, that partnership spans the entire process of design support and verification, production and installation and monitoring. For example, TNO is responsible for producing and testing the PV laminates, UHasselt and imec work on modelling PV laminates and sensor incorporation, Zuyd University of applied science is involved in lifetime testing of the laminates incorporated in small scale road elements and Forschungszentrum Jülich focuses on the simulation of the electrical design. The Institute for Highway Engineering of Aachen University (RWTH) does not focus on the PV component, but rather on the integration in road sections and mechanical performance.

Different properties
‘Our institute focuses on 2 fields of work: traffic planning and material technology’, says Nicolas Carreño, civil engineer at RWTH. ‘Within Rolling Solar, our involvement revolves around that second expertise. Our task is to support the development and application of road parts that are integrated with TNO Solliance’s thin film CIGS solar cell modules. We test different configurations for various aspects, give feedback and make suggestions, in order to realize an optimal test product within this pilot. That’s new to us. A PV road is not a normal road. PV laminates have completely different properties than asphalt or concrete products. In addition, the laminate is glued to the surface. The methods we normally use are therefore not one on one applicable in this project; we had to adapt our test equipment to it, among other things.’

Deformation
RWTH does various simulation tests on the samples it receives from TNO. In particular, the resistance to mechanical stress and stress due to heat development is investigated. Thus, RWTH performs a so-called Raveling Test. This determines how the top layer of small glass beads, intended to ensure the correct roughness of the road surface, adheres to different conditions. The Pull Off Test is aimed at determining the quality of the connections of the layers in the PV laminate and the concrete surface. A Wheel Tracking Test helps evaluate the behavior at high temperatures, for example in summer, and the vulnerability due to permanent deformation of the samples.

Closing the gap
Carreño: ‘Our measurements focus mainly on robustness. When it makes sense, we will also discuss alternatives with TNO that may improve the product. The data we generate is also of great value to project partner ISAC, a spin-out from our university. As partner in this project, the company is engaged in modelling this application, in order to enable engineering of PV roads that optimally fit specific circumstances and traffic use. In doing so, it makes an important contribution to closing the gap between R&D and its actual application in practice.’

‘Roads connect people and economic activities. Delays and shutdowns damage that essential function. After they have been built, road surfaces must last 10 years or more without too much maintenance. By adding PV, you create a nice double function. But it should not detract from the essential function. Moreover, the solar cell modules also have to have a long life to earn themselves back. In addition, and even more important: safety is always paramount in our field of work. If you apply PV laminates to it, you have to guarantee that it will not be compromised. All in all, there is still a lot of development and testing to be done before we are ready for market introduction. Within Rolling Solar, we are now taking important steps in this regard. But some questions will also go unanswered. RWTH has not been able to investigate everything it wants, for example in the field of low temperature behavior and moisture, and the production of the road elements for the trial at Brightlands Chemelot Campus will start soon. So, this beautiful project is already asking for a follow-up.’

Rolling Solar is part of the Interreg programme Euregio Meuse-Rhine. The project is funded by the European Regional Development Fund and supported by the provinces of North Brabant, Flemish Brabant, Limburg and Liège, and the Dutch Ministry of Economic Affairs and Climate.