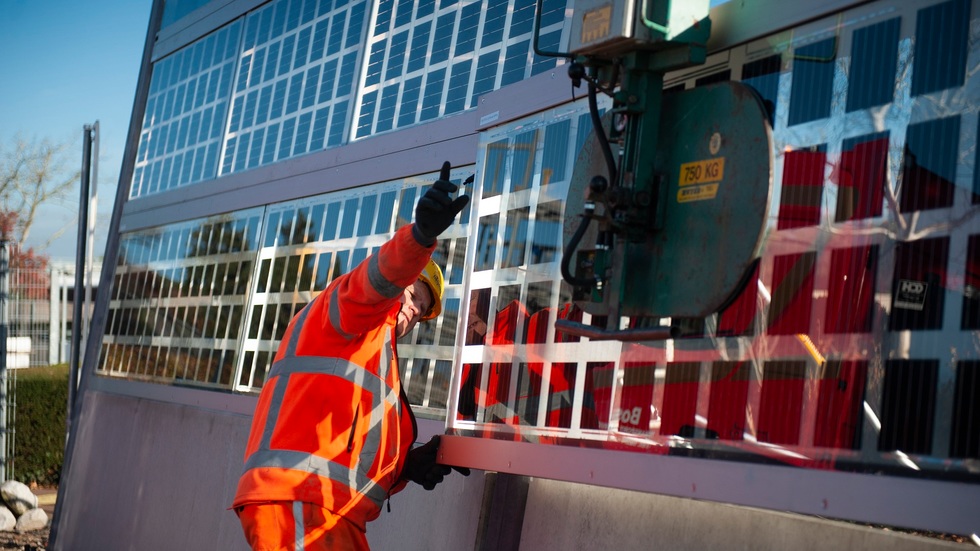 Rosmalen in the Dutch province of North Brabant is home to the noise barrier of the future. It is equipped with 2 different types of integrated thin film solar panels, one of which is an absolute world first: double-sided CIGS solar cells. The test setup will be extensively monitored over the next 12 months and that is an important step in making PV noise barriers a standard feature of the street scene. ‘Offering landscape architects maximum design freedom is the ideal picture for the near future’, states Stijn Verkuilen, innovation manager at construction company Heijmans. The noise barrier in Rosmalen has been developed within Rolling Solar. In this European innovation project various consortium partners work together on new technologies and applications involving the integration of solar cells into the public infrastructure.

Test installation
The Rolling Solar project is being carried out as part of the Interreg Euregio Meuse-Rhine program in which partners work together across borders. It is financially supported by the European Regional Development Fund (ERDF), the provinces of North Brabant, Flemish Brabant, Flemish Limburg and Liège, and the Dutch Ministry of Economic Affairs and Climate Policy.

For the construction of the PV noise barrier, Heijmans has joined forces with Soltech, Sanko Solar, Solliance and TNO EnergieTransitie in Rolling Solar. Together with these partners, the construction company has built a test installation equipped with thin film solar panels on its own site in Rosmalen.  At Thor Park in Genk, the Belgian partners of the Rolling Solar project are working on a similar pilot installation in order to jointly achieve a rapid large-scale application of PV technology in noise barriers.

Local consumption
Heijmans is not without experience when it comes to constructing PV noise barriers. For example, in the Solar Highways project the company built a 400-metre-long test noise barrier equipped with 136 integrated two-sided solar panels. ‘We learned several lessons in this project along the A50 near Uden’, says Verkuilen. ‘On the one hand, the necessary maintenance was less than expected because the noise barrier turns out to be vandal proof.  On the other hand, the economic yield has been somewhat disappointing. This is partly due to the fact that the solar power generated is fed into the electricity grid at a low price. So, one of our conclusions was that it is desirable to stimulate local consumption – for instance by supplying a local energy cooperative or charging electric cars – in order to increase the economic revenue.’

Increase efficiency
According to Verkuilen, further technological development is needed to reduce costs. ‘Increasing efficiency is one of the ways to achieve that. Moreover, we want to improve the aesthetic possibilities. The ideal picture is offering landscape architects maximum freedom when it comes to design. When we are able to do that a PV noise barrier can be labelled as an attractive green alternative to a noise barrier made of concrete.’

Competing purely on price with traditional concrete noise barriers may still be a utopia, yet according to Verkuilen significant steps can be made. ‘Through Rolling Solar, we want to narrow the “gap” in a such a way that governments can opt for a PV noise barrier much easier in the near future.’

Concrete plinth
According to Verkuilen, the biggest win lies in reducing the return on investment of PV noise barriers. The generated level of electricity is good, but the initial investment costs are still too high. Hence, reducing these costs is the most important challenge that Rolling Solar is working on. ‘A number of innovative PV technologies are therefore being tested at the new installation; from a CIGS module from Solliance to a Soltech module equipped with bifacial silicon solar cells. In addition, we hope to add a module with perovskite cells to the test installation eventually. After all, perovskite is seen as the solar cell of the future.’

The demonstration set-up built by Heijmans is made up of a concrete plinth that reaches up about 1 meter above ground level. This is to prevent, for example, low-level PV modules from being damaged during mowing operations. From a height of 1 meter, 5 cassettes have been placed in which PV modules are incorporated. Because the system is modular and the carriers are universal, the noise barriers can be built quickly. In case of possible defects, the so-called cassettes can be replaced easily.

Various parts
Verkuilen explains that there are numerous options in achieving the best composition of the installation. ‘The total length of each individual PV cassette is 6 meters and the height is 1 meter. It can be constructed out of various parts, for example 2 PV laminates of 3 by 1 meter or 3 PV laminates of 2 by 1 meter that can be laminated between glass. The thickness of the glass can also be varied. We have now opted for 2 times 6 and 2 times 8 millimetres thick glass. In many locations, using the thinnest glass offers sufficient noise reduction. But if you want to be sure, you can always choose 2 times 8 millimetres.’

The test installation has 2 reference cassettes equipped with Soltech crystalline silicon solar cells. In addition, a cassette with Cadmium Telluride (CdTe) solar cells from Sanko Solar has been installed. The most important novelty lies in the 2 middle PV cassettes. These are equipped with double-sided CIGS solar cells. ‘And that is a world first for thin film PV’, states Verkuilen. ‘These solar cells were developed in the laboratories of Solliance and laminated in the Soltech factory.’

Construction shadow
‘With this pilot installation, the Rolling Solar consortium demonstrates that it is possible to build complex systems such as PV noise barriers through mass customization’, explains Minne de Jong, researcher at TNO EnergyTransition. This knowledge institute is responsible for monitoring the PV noise barrier in the Rolling Solar project and the development of customized PV solutions that can be produced at low costs . ‘There are several types of solar cells in the pilot installation. One of the aspects we want to understand is how new PV module technology behaves in a complex environment such as a noise barrier. In this kind of installation, you have to deal with unusual irradiation patterns and construction shadows that are foreign to solar roofs or solar parks.’

De Jong explains that the cassettes with thin film solar cells are placed ‘double’, so that TNO can carry out 2 types of tests. ‘On one half, we perform IV curve measurements to see how the module behaves as a consequence of these unusual irradiation patterns. The other half of the system is connected to the electricity grid via inverters, so we can monitor the performance of the power supply. In this way we can investigate whether the system as a whole – the PV modules and inverters – works well and functions properly. We have a lot of confidence in a positive outcome of these measurements. But even in the unlikely event that the results are disappointing, these concern only the shadow effects in order to better understand and mitigate them.’

The question that remains is: when is Heijmans satisfied with the results of the measurement of TNO? ‘The main goal is to make the PV noise barrier affordable’, says Verkuilen. ‘We aim for the best possible cost-benefit ratio in euros per kilowatt peak and megawatt hour. If the test results are favourable, we hope and expect to roll out PV integrated noise barriers more broadly in North-West Europe in the next decade.’